BMX is a cycling extreme sport with a special bike either in competitive racing or freestyle, in road and off-road.  in early 1970 in the United States, children began racing their bicycles on dirt tracks in southern California on normal bikes and that’s when BMX created. after that companies start to produce a customized bike called “BMX Bike” for better handling and performance. 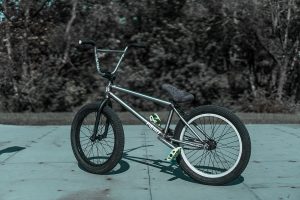 now use for race and freestyle in tracks, dirt, vert, park, flatland and street. BMX frames are made of different types of steel, and aluminum. Cheaper bikes are usually made of steel. High-quality bikes are mostly Chromoly or high tensile steel, although the latter is heavier and stronger. High-performance BMX bikes use lightweight Chromoly.

Freestyle and Dirt jumping bikes wheel sizes are 16″ and 18″ for minors and smaller riders, 20″ for most common riders and some companies offer 24″ or bigger BMX bikes, for older riders which are called cruise class. The cruiser style bikes are rolls better and easier to jump but the 20″ is more agile.