NORTH VANCOUVER (NEWS 1130) — Have you ever wanted to jump into a deep river canyon and go for a swim — but held back in the name of safety?

If so, you might be suited for an up-and-coming sport called canyoning.

François-Xavier Gagnon is capitalizing on the growth of this, his favourite new sport.

“It’s a mix between swimming, scrambling, jumping into pools and repelling waterfalls,” he says. “What’s so great is the feeling that you are in a very isolated area. There’s not a lot of people venturing those canyons.”

He leads groups on the North Shore and the Sea to Sky, and says the sport has become increasingly popular.

“It’s getting big everywhere. You go to Indonesia, Japan — and there’s nothing here on the West Coast, so I thought, there was a need, and a nice niche for me,” he says.

One of the more interesting local routes is Box Canyon in Squamish.

“Fraser Valley is like going through a tunnel, pretty much, like a corkscrew tube where the water’s been drilled through the granite, and it’s just magnificent,” he says.

The North-Vancouver-based guide says people are coming from far and wide to experience our granite gems, so he’s roping up to give them lessons.

And these lessons are important, he says, even for experienced rock climbers.

“People think because they are a rock climber and they have repelled before, that they are fit to go in a canyon, but in fact, canyoning has it’s own technique,” he says.

“You’re playing with hydraulics, waterfalls and rapids, so there’s a drowning factor.”

As the spring melt calms down, expect to see a few more dedicated canyoneers in the mountains near you. 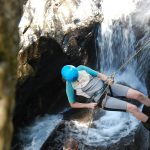